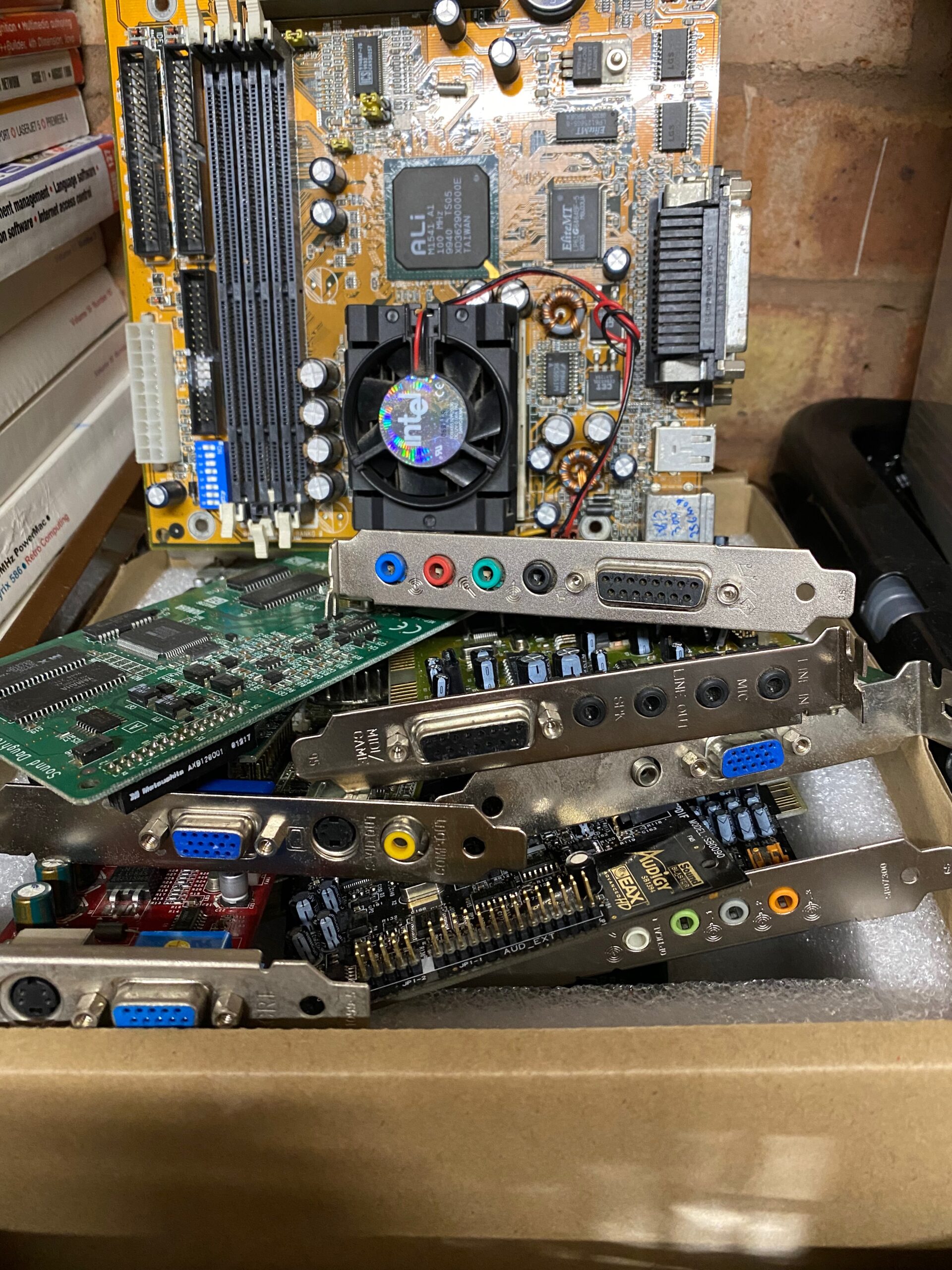 For anyone who knows me in the real world, it would not be surprising to hear that I love using old computers. I really believe the “golden” age of computing was between 1995 and 2001, a time when computing was genuinely exciting, massive leaps were being made in hardware, software and user experience and you really felt that a PC was a tool that you could do almost anything with – the opportunity for creativity was what really captured me in that era.

Like your dad with his “good bit of wood” pile in the garage, because you never know when you might need it, my garage is partially filled with old PC parts and cases. If I’m honest, until recently, I didn’t really have a proper reason to use any of this kit other than its fun to play old games on Windows 98 every now and again, and also to remind yourself that it perhaps wasn’t that exciting when Windows 98 would destroy itself every few weeks, probably because you installed a program or restarted it during the wrong phase of the moon.

Still, weirdly, I kind of miss the fragility of these old machines. Fixing issues and knowing what you were doing was part of the fun – I enjoy problem solving. These days, whether you hate Microsoft or not, it is difficult to argue that Windows 10 and 11 are something you install once and then no matter what you do to it, it just keeps going. I cannot remember the last time I had to format my machine and start all over again, other than building a new computer.

It came as a nice surprise recently that I stumbled across a reason why I needed to use an old PC. After getting back in to film photography again, I needed to resurrect my scanner which is fairly old and no longer supported in modern versions of Windows. This is a classic example of unnecessary obsolescence. There is nothing wrong with the scanner, it’s been in its original box in storage and still works as it did when new. The only “problem” with it is that it is old.

The solution was simple – just go back in time and put two obsolete pieces of technology together and everything works as it should. It’s odd how the mind works, in my head I sometimes expect old things not to work properly, or differently to how they used to. Why would they? To a scanner and a computer, there is no difference between 1999 and 2022, they work exactly as they did back then. Out, then, came the P3 450. My electronic “good bit of wood, that.”

Windows 2000 is, in my opinion, peak Microsoft. It is everything they did well and failed to do well thereafter. It’s small, powerful, insanely stable and reliable. It has all the features I want an operating system to have and none of the ones I don’t and above all, praise the lord, it has the original style Start menu. Microsoft got it 100% bang on in Windows 98. There have been zero steps forward since then in terms of application organisation and launching. It works, leave it alone. Even now, the first thing I do on a Windows 11 machine is to immediately replace the hateful new start menu with the old Windows 2000 one. Couple this with the “quick launch” icons and you’re sorted. You don’t need any more.

The Pentium 3 450mhz was launched in February 1999, and so is a perfect period correct match for a Windows 2000 machine. Coupled with 768mb RAM, a reasonably outrageous graphics card (256mb RAM!) to drive a modern HD monitor and a large hard drive, it is the stuff of absolute geek dreams in the twilight of the millenium and it shows. It’s a joy to use – fast, responsive and stable.

In fairness to Canon, they still have the software and drivers for their hardware on their website and will give you the software you need even back to Windows 98. That’s pretty decent customer service. It costs a lot of money to maintain and run web servers and storage on the scale a large business needs and one way of cutting costs, as many manufacturers do, would be to simply archive it all off and only concentrate on new kit, so they are doing their bit to keep old stuff from landfill.

My workflow, if you can call it that, is extremely simple. It is negatives, scan to TIFF, open in Bridge CS5, open in Camera Raw, make basic adjustments, open in Photoshop CS5, correct dust and sharpen, store on a network connected drive. That’s it. I don’t really like heavily edited images, probably because I’m not very good at it, originality is important to me. This machine handles it absolutely perfectly. I shouldn’t have been so surprised, all of the kit was released at a similar time and is more than capable of handling it. I thought Photoshop may have been a bit of a push, but it wasn’t.

Minds like mine then start wondering. If it’s such a nice user experience for this task, what about other things? Office XP / Office 2007 are my favourite versions of Office. They’re colourful (remember when we were allowed nice colourful interfaces?!) and they have every feature you could ever need. Office XP works a treat on Windows 2000, 2007 not so much. The deal breaker, however, is the internet. We all rely on being able to flick a browser open, grab a piece of content or a definition and so on, and continue with our work. On Windows 2000, the internet is truly out of reach, there are no browsers available that live up to modern encryption standards.

This is the final, underlying issue which makes old tech “obsolete.” Whilst it is absolutely possible that I could do every single aspect of my day job on this P3 450 box, technology outside of its world has moved on in such a way that it can’t keep up. Applications are either deliberately or necessarily incompatible and thats just the way it goes. Furthermore, you can’t just install Windows 10 on it and solve your problems, it would grind to a halt and is pointless, you had the old Windows for a reason!

I was happy with this set up until I won the Canon 10D on ebay. I shot a few tests and plugged the memory card into the P3 machine. Bridge opens up fine, but then opening a RAW file and it suddenly started to show its limits. It could display the image, but it took 10-15 seconds to process before displaying sharply. Following this it would take 10-15 seconds to process each change as it was made and before you could perform any new actions. The machine had finally met the limits of its capability and I couldn’t justify having one computer for scanning and one for processing old RAWs, I wanted to be able to use these all together on the same machine. A new plan was needed.

The 10D came out in 2003 and during that year, CPU speeds were around 2-3Ghz and 64 bit processing had just hit the mainstream in the form of the AMD Athlon 64 processors. Dual core processing was just around the corner. This would go some way to explain why the P3 450 couldn’t handle a RAW file from the camera without having to seriously think about it first. Somewhere around here would be the sweet spot between processing power, compatibility with my old scanner and compatibility with Photoshop CS5.

Asking around, a friend had a spare HP computer sat around collecting dust. It has a first generation Intel i5 inside it, 16gb of RAM and a 256gb SSD. In other words, it is massively over the top for my needs, but it was free. I settled on using Windows 7 for a few reasons. First was 64 bit compatibility. These days we have forgotten that there used to be a limit on how much memory Windows could physically use. All versions of Windows up to and including XP (yes there was a 64 bit version but no one used it) can see a maximum of 4GB of RAM.

This wasn’t exactly a limitation in its day, 4GB on Windows XP was a massive amount. I’m fairly certain that when I was at university, my Windows XP machine ran on 1GB at most. However, Photoshop has a habit of consuming huge amounts of memory in certain circumstances such as large panoramic photo merges and large content aware fills – both things that I definitely will be using, so 64 bit it had to be.

The other reason to select Windows 7 was that it’s just modern enough that pretty much everything still works on it. I can run an up to date web browser, install the latest version of Office and access all the services I need. Above all, Windows 7 is, after a few tweaks, a really nice user experience. It’s just a jolly, colourful interface with some nice transparency features. I miss the look of Windows 7.

Finally, it’s fast. On this machine it’s *stupid fast*. It loads up in seconds, responds instantly and is just so nice to use. If ever I need to, I can quickly nip on the internet to get something and it’s a machine which is literally capable of doing everything I need a work machine to do and I love it. I get more enjoyment out of using this old machine, with all my old kit, than I do with my modern machines. I hesitate to say it, but it adds to the experience of using old camera gear when you are using old or nearly period correct gear with it, I’m in old tech heaven and I like it.

Is there a downside? Security. There are obviously no more updates for Windows 7 and no one makes anti virus software for it. In all honesty, I could operate in paranoid mode and turn off the network connection unless I was using it but actually, it’s a risk I’ll take right now. It doesn’t get left on, if it gets compromised it won’t be the end of the world.

So there we have it. I finally found the perfect compromise in terms of compatibility, authenticity and user experience whilst proving that for once, I really did have a good reason for keeping all those “good bits of technology” sitting around, convinced I’d one day find a real use for them other than nostalgia. I can wholly recommend that if you have the room and you enjoy using old camera gear, use a period correct machine. It’s all part of the fun.