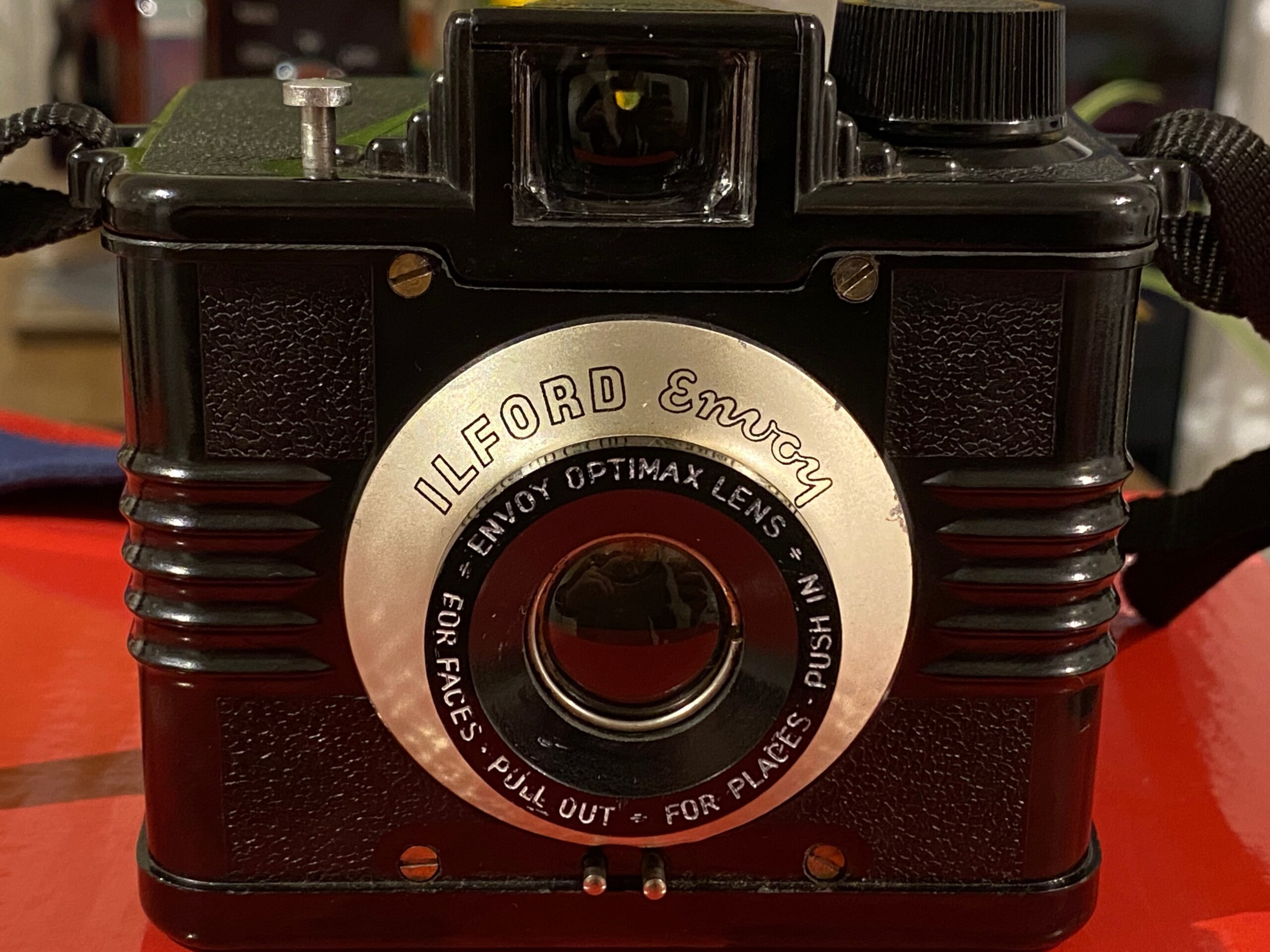 I admit it. I made a mistake.

I recently acquired a carrier bag stuffed with negatives from films shot by my Grandfather and had begun the time consuming task of scanning them all in an effort to preserve them. Some were so old that they have started to decay or stick together and the image below was one of those that had seen far better days:

The photo itself is nothing particularly special, it’s not a family member or anyone I have a particular connection with, but I’d looked at the camera and thought (prepare yourself for a sad camera spotter moment) “That’s an Ilford Envoy!” Well, what more excuse did I need to then fire up ebay, find one for sale and add it to the collection of cameras to review and restore?

The only problem is, it clearly and obviously isn’t an Envoy. It’s not even an Ilford camera, it’s a Kodak Brownie 127. They share many similarities – both are bakelite in construction, are from a similar time in history and are as manual as they come. An Ilford, however, it is most certainly not.

What do you do when you’ve bought an old camera for no apparent reason at all? Clean it up and review it anyway…!

If it isn’t broken, find one that is

I didn’t particularly want to spend a great deal on an Envoy. Bakelite and box cameras in general are not my particular preference when it comes to old cameras or ones that I plan to get a great deal of use out of. They’re certainly interesting from a design and history point of view and, given the choice, I’d prefer to buy one that is worse for the wear and needs some restoration. This isn’t because I’m an expert in repair (as we’ll find out later) but simply because I like the idea of bringing something back to life and saving it from landfill.

I found the listing above and it fit the bill perfectly – not over priced, in fairly ropey condition but good enough that it could probably be saved without too much of an ordeal. I offered £7 for the lot and it was quickly accepted. What arrived was as I’ve come to expect – filthy, stinking of smoke and damp with most of the “accessories” needing to be placed straight in the bin for the sake of everyones health. The Envoy itself wasn’t actually so bad. Underneath the filth was a camera in remarkably good physical shape, the two obvious problems being a sticky shutter and a missing frame counter window round the back.

Having learned a great deal from my previous restoration attempt with an Ensign Ful-Vue Super I knew what to expect and, more importantly, what not to do. The construction of the Ilford Envoy is extremely simple, about as simple as you could possibly imagine so taking it apart was not a difficult task in the slightest – requiring only a screwdriver and a pair of long nose pliers to completely disassemble.

Strip down and clean up

Considering this camera had not been stored carefully nor particularly well looked after, most parts had survived surprisingly well. Bakelite has a habit of being crack-tastic and brittle – especially as it ages. The only part that had failed on this body was a where one of the viewfinder screws were seated and that wasn’t a game changing problem in terms of repair. The only other damage was a very slightly chipped piece of glass on the circular end of the view finder. Some metal parts showed signs of light rust but that’s about all there was to report in terms of condition.

I liked that from the factory, the approved way of holding the shutter together was with sellotape. I don’t think its structural but it definitely helps to keep the two parts together before it is screwed in to the housing.

Once taken apart, I took the various bits and pieces and bunged them in a washing up bowl with warm water and attacked them with a tooth brush for a few minutes. This did precisely nothing for the smell of a thousand historic cigarettes that this camera has smoked in its life, but it did do a remarkably good job of cleaning away the layers of filth.

Everything was going really quite well until I did something really, really stupid.

The missing red frame counter window had me stroking my beard for a moment or two until I realised the solution was right in front of me – the second camera that had been delivered with the Envoy. This body was in far, far worse condition with quite a few bits missing so it would make perfect sense to use it as a donor. I popped the little window out and went to push it into the Envoy only to find that the hole featured a slight extrusion that was getting in the way.

Can you see where this is going? “I’ve got the solution for that!” and promptly whipped out the Dremel and a grinding attachment to start widening out the aperture of the window, black dust clouds and all.

To understand why this was such a monumentally stupid move, we need to take a detour and learn about Bakelite. Bakelite was an early attempt at creating a plastic type material around 1907-1910. It was a total revolution in material science and saw great commercial success. This was during an “anything goes” period in history where people would casually keep bits of Uranium in their pocket or desk drawer and whiskey was considered medicinal for babies that wouldn’t sleep.

Bakelite contains, amongst other things, formaldehyde and our old friend asbestos. Both are pretty good at killing you slowly, and both are banned in many countries. The worst thing you can do with both substances is turn them into a cloud of dust and then breathe them in. Now do you see the problem?

I had this nagging feeling that grinding away at this material might not be a good idea so I stopped and gave it a quick Google. I have never been so happy to have had at least a tiny bit of common sense in that I had at least worn a dust mask and eye protection. I spent the rest of the day paranoid that I’d poisoned myself and it didn’t help that I’d effectively made the garage a no go zone as it had now been turned into a giant health hazard.

There’s no hiding from it, the camera looks a lot better than it actually works.

It took me quite some time to run a roll of Fomapan 200 through it, but I finally found the time to finish it off during the recent cold snap. Despite my best attempts to clean up and restore the camera, I’ve very obviously missed something because it is completely murdering the film every time it is wound on.

On a positive note the lens gives surprisingly clear and detailed images for something so simple. I’d talk more in depth about the image quality if it wasn’t for the fact the camera has scraped the life out of every single millimetre of the film. I’m fairly sure the film was loaded correctly, it didn’t seem overly difficult to move to the next frame so I’m pretty much at a loss as to what’s happened here.

Upon seeing the state of these negatives I opened the camera back up and inspected the rollers and edges of the film chamber. Try as I might, I can neither see nor feel any kind of roughness that would cause this. I am definitely missing something, but there comes a point with a £5 bakelite camera that I have very little interest in using again in the future where you have to just admit defeat and move on.

This camera turned out to be something of an anti climax and disappointment. Admittedly, I didn’t set out with high expectations, but it always feels better attempt to repair, restore and resurrect something rather than just commit it to the great landfill mountain. I wonder whether the reason this Ilford Envoy was in such a state to begin with was because of its penchant for destroying films. Either way, I still learned plenty from the whole experience, not least of all about trying not to inhale noxious substances whilst being extremely stupid.

These box cameras like the Ensign Ful-Vue’s we’ve seen previously on this site are all much of a muchness. During the 1940’s, 50’s and even in to the 60’s these types of cameras were the widely produced, cheap, entry level photographic tools of their day. Because of this, they are just that today – cheap, not particularly impressive and very inflexible in terms of exposure and focus control. They are largely metal and Bakelite toy cameras made to look like something far more impressive.

I’m sure that artistically, there’s a niche for these and the people who have the vision and ability to get the most out of them will love the almost primitive simplicity of the designs and the complete “back to nature” experience they give. I don’t think I’ll ever have the talent to be one of those people. For me, this is one type of camera that I’m more than prepared to let pass me by in future.

If you’re looking for the cheapest possible entry into the world of medium format / 120 film, then by all means give one a bash. You can more than easily have a great deal of fun with one, but when you’re paying £5-6 for 9 shots, there’s a feeling that you should perhaps have a little more control, a little more quality in terms of optics to do that extra cost some justice. This is where TLR’s and foldable or bellows style cameras have the edge. For a significantly higher price tag, you get a significantly more capable imaging tool.

The Ilford Envoy is definitely a beautiful piece of art deco design, but that’s all it is. The lens is great for such a cheap and cheerful camera, but you can definitely get better for your medium format adventures. I plan to take one more trip down Bakelite lane, I obviously couldn’t leave this particular thread alone without picking up the Kodak Brownie I should’ve done in the first place and I have indeed already bought one.

However, this story started with a mistake and ends with one too. The camera I bought arrived perfectly packaged and in seemingly great condition with one minor flaw. The lens glass had fallen out.