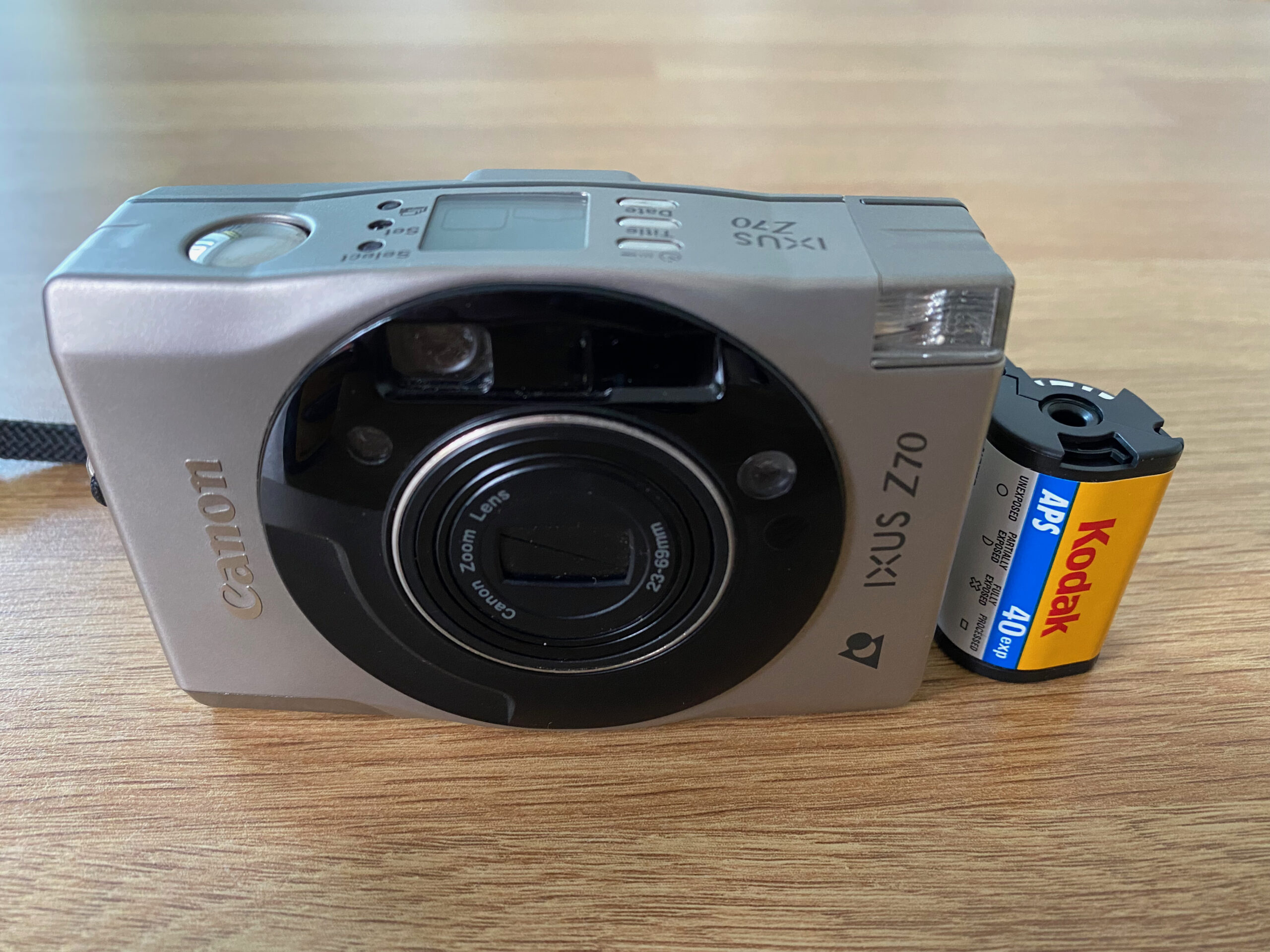 It is fairly obvious that it is possible to pick up some really interesting or fun to use camera gear on Ebay for very little money, but how much can you get and for how low a price? Currently, a roll of reasonable black and white film, such as Ilford HP5 will set you back about £5 not including postage. This made me wonder whether it was viable to limit myself to finding gear for the price of a single roll of film. Since then, I’ve been playing a game which involves searching the film camera category for cameras priced £5 or less.

I then set about looking at the images of cheap old kit to try and find cameras which still have a film in them. This is for a couple of reasons – firstly, I thought it would be interesting to develop “lost” images and to write about them, secondly, I have no experience in developing C41 colour films and so it’d be a fun way to learn without losing any images that I really wouldn’t want to lose to a mistake during development.

The first win was this Canon EOS 700:

The picture doesn’t even begin to do it justice. This camera is disgusting. Not only does it smell like it has smoked a thousand cigarettes, it is generally sticky, filthy and just… unpleasant. These EOS cameras used to roll the entire film out when loaded and then roll it back into the canister when you took each frame. When it arrived, it was displaying that the end of the film had been reached. I took a picture with it to make sure and it made the whirring sounds I’d become familiar with by using the EOS 55 and I made the assumption that the roll would’ve been safe to remove.

Big mistake. Turns out the camera has a fault where it’s not rewinding the film at all with each frame. I opened the film door and immediately ruined the whole roll by exposing it to light. Great. Lesson learned, however, I now only open unknown cameras in a dark bag in case they haven’t wound the film safely back in.

If anyone would like a free EOS 700, let me know. You’re welcome to it, it really doesn’t suit me at all. I don’t like the ergonomics, handling or controls of this camera at all and the lens is just bizarre. It’s an EF lens, but the zoom controls are buttons rather than a ring. Whoever designed this was clearly having a laugh that day.

Next to arrive was this Hanimex 35HF Motor, purchased for the grand sum of £3. This camera is absolute junk and would’ve been terrible even when brand new. Not to worry, there was a present waiting around the back:

I rewound the film using the built in crank but it was obvious nothing was happening so in to the dark bag it went and I manually retrieved the film from the camera. I don’t want to just waste the remaining 12 or so frames despite the fact the age of this film will probably mean the colours are largely desaturated and noise will be through the roof. I’ve loaded it back in to the EOS 55 and I’ll shoot off a few frames at the weekend. I think I’m also going to cross process this one in Rodinal and extract black and white images from it. I shall report back when they’re developed.

Moving on, I’ve always had a real soft spot for the Canon Ixus film cameras. I love the compact, angular, minimal design of them. It’s still incredible that a whole film camera with a reasonable lens could be shrunk into such a small package. However, they achieve this size by using the short lived APS film format. If you don’t remember APS its because it was something of a failure and most people just carried on using standard 35mm until they transferred to digital later on.

Unlike 35mm, APS is dead. Not just a little bit dead, but stone cold dead. Why are we talking about it then? Because I like obscurity, obsolete technology and using things that have long since been consigned to history. During one of the £5 film camera searches, an ixus with a difference came up – this one had an unused film with it.

Looking into it, developing APS film yourself consists of getting over many hurdles. You’ve got the problem of opening film cartridges which were not designed to be manually handled, film which has no sprocket holes that make it easy to load onto a reel and, talking of reels, APS negatives are only 24mm wide and this means they don’t fit in standard developing reels.

I found an excellent article on using APS cameras in modern times on the website “35mmc” that you can read here. It’s got as much information as anyone really needs to understand the format and why it really is going to die out very soon. The article was written in 2021 and even since then the availability of APS film has diminished even further, complimented by the inevitable price rises as it becomes more scarce. It’s not unusual to see APS film advertised for £10-15 despite the fact its well past its best and will have degraded significantly unless stored properly, which is unusual.

Being as I’d found a £5 film which basically came with a free camera to shoot it with, I felt it was worthwhile looking more into how I could fashion a reel to actually develop the shots if I did indeed buy the Ixus from eBay. It turns out that someone had designed and shared a 3D printable reel on www.printables.com which I’ll link to here if you’re interested. I knew we had a 3D printer in the office at work that had been lying redundant for years, this was a viable option.

After repeated cleaning, burning myself really quite badly on the print head, replacing the print bed, trying different reels of plastic and wasting far, far too much time trying to get it to work, it became clear that the printer was knackered. Ultimately I gave up and searched for a company that would print it for me. The cost of 3D printing was astounding, with some companies wanting north of £80 to print a fragile plastic reel. Luckily, I found a company in Edinburgh who would knock them out for £20 including postage, which is more than reasonable. I await their arrival.

The Canon Ixus Z70 arrived this morning. I’ve no idea if this is a good camera or not, where it fits in the range of history of these cameras, but it was a few quid and on first glance looks in good condition. It takes really odd CR2 batteries (not to be confused with 2CR…) which I managed to get from Screwfix of all places for basically nothing. A quick test revealed everything seems to be fine except for the buttons on the top of the camera which set the date, time and a few other options.

APS film really was “futuristic” in its design. You can get the camera to encode the date each picture is taken on a magnetic strip on the film, furthermore you can get the camera to encode how many copies of each frame you’d like the laboratory to print out for you when they develop it. This is really neat, but slightly flawed in that you have to know before you take the picture how many you’d like and there’s no way to retrospectively increase the number of copies after a shot has been taken.

Eventually I managed to set the correct date and time. I did this for no reason other than it was annoying seeing it flashing dashes at me every time I looked at it. The design of these controls is just unforgivable, I don’t know what Canon were thinking when they made this camera. The three buttons that control date and time setting are flimsy rubber which is recessed into the top of the case and can only be pressed using a small plastic nub which has been fixed to the camera strap. It’s a real bodge. Inevitably, through use and abuse, the most used button has almost disintegrated. You really do have to press these buttons overly hard to get them to even register a press.

They clearly saw a long and bright future for APS in 1996, as unlike the EOS 55 which doesn’t recognise dates past about 2005, this had no issues with it being so far into the future that no one reasonable in the 90’s would’ve expected this to still be “a thing” in 2022.

After a quick clean, I’ve loaded the film and it’s all ready to go. I plan to keep this camera in the car with me and use it to snap things that I’d normally miss because my less practical cameras are at home. It’ll be a real throwback to carry a compact around everywhere and use something which isn’t an SLR for a while.

So there we have it, a couple of new films to shoot, a 3D printed developing reel on the way and my first foray into a long dead film format that I don’t even know if I’ll be able to develop yet. I’ll get back soon with any results or updates.

In the pipeline is another DSLR project, but that took an unexpected turn earlier and that is a story for another time.