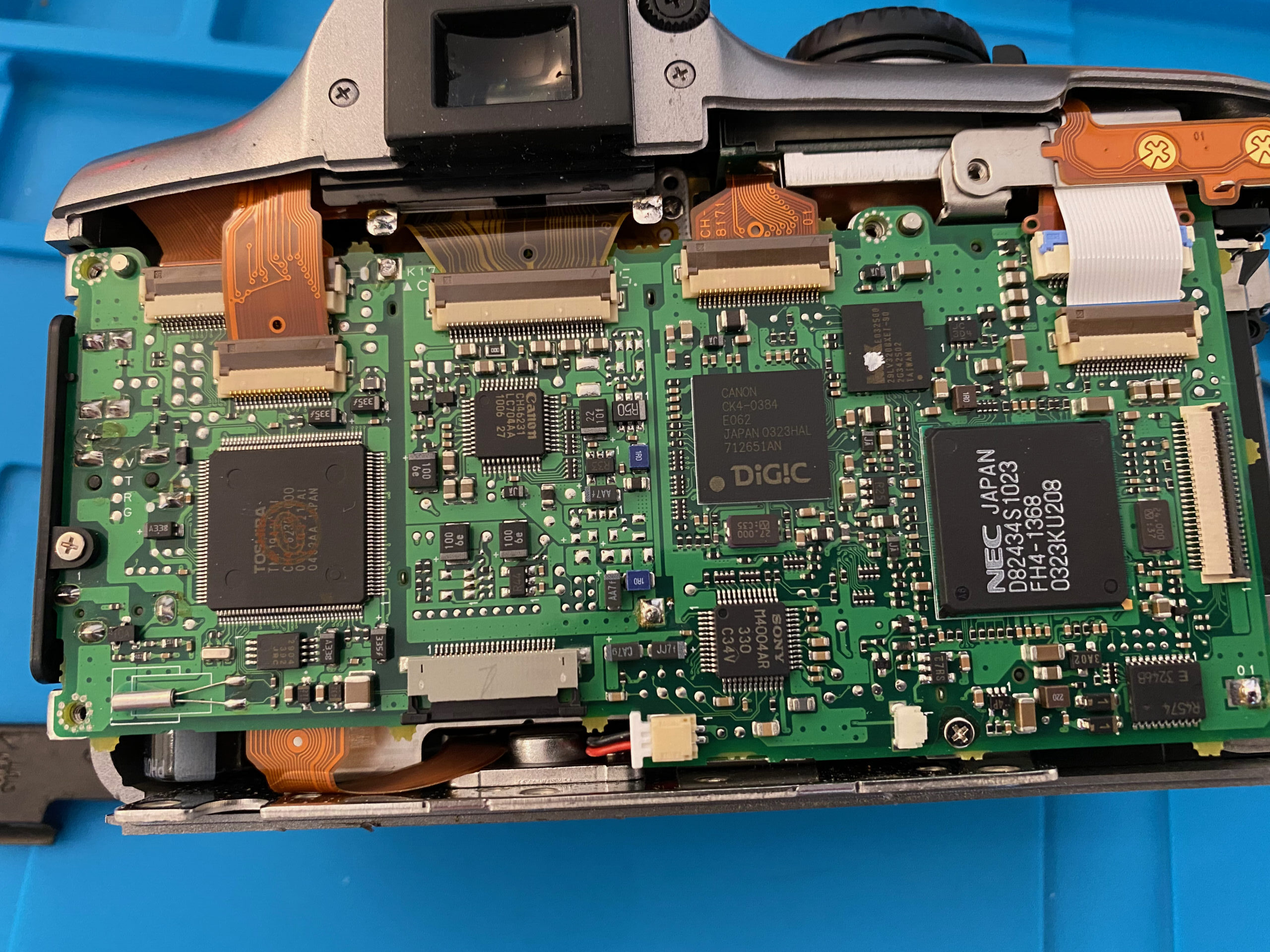 The Canon 300D/Digital Rebel (an awful name for a camera) was truly ground breaking when it was released in 2003 for around £800. For the first time a digital SLR with a well regarded sensor and image quality was available for a price that most “enthusiasts” would consider very enticing indeed. Canon simultaneously introduced a new range of crop sensor DSLR specific lenses called EF-S which solved the problem of these bodies multiplying the focal length of any lens by 1.6x. It also allowed Canon to make some properly cheap and tacky lenses.

It’s easy to dismiss the 300D today as outdated and outperformed by any relatively modern device. It is factually correct to state that it was always a budget camera, it hasn’t aged well in some respects, the use of CF cards is no longer the standard, the sensor resolution has been outpaced by mobile phones and most 300D bodies suffer from degradation of their rubber parts which makes them just smear black everywhere. However, as we’ve discovered on this site, that’s not how I’d judge any camera.

On release, the 300D sold extremely well and owners were more than pleased with the quality of images it could produce. In their comprehensive review of the camera, DPReview concluded:

The EOS 300D is a formidable camera, not from a feature set point of view. Not from a body finish point of view (which is actually better than I’m sure you’re thinking). Not from how its feature set compares to other digital SLR’s (although it can certainly hold its own), but rather for what it offers, for its value for money. And for what this camera could mean for the future of digital SLR’s and the entire prosumer digital camera market.

A formidable camera. As I’ve said many times before, just because something is now old, this does not mean that a device suddenly stops performing as it once did. Expectations may well have moved on, but quality is permanent. The only way to find out from my personal perspective was to get hold of one and give it a go. Any excuse to buy more things I don’t need, right?

I won a 300D, battery grip, 2 memory cards, charger and case for £24.99, sold as “used.” What arrived was, to put it lightly, disgusting. One thing that always surprises me with so many online sales is that people don’t seem to care about sending utter filth through the post to you. Whenever I pass things on, one of the first things I do to an item is give it a clean. Not only does this seem like a fair thing to do, it also makes the item look a lot better which means it’ll sell and probably for more. Even something broke, I’d clean it. It’s just courteous.

I knew things were going to get interesting the moment I cut the tape on the box. The smell that came out was a mixture of old dog, damp, mould and a hint of cigarette. Actually, it stank of cigarettes. It does make me stop and wonder what is wrong with people, but, not a problem, I don’t really want a camera bag, it’s the contents we’re interested in. Things didn’t get much better upon opening it, the camera strap was even more disgusting than the bag itself, with several large patches of mould.

Once the bag and strap were out of the way it was possible to get a closer look at what I’d actually got and what condition it was in. First impressions were not bad, for something so cheap it was in perfectly reasonable condition, underneath another layer of filth and the sticky black grip, I thought everything was going ok.

It powered up fine, the shutter works and the screen displayed the correct information. I couldn’t face putting my eye near the viewfinder so God only knows what that’s like yet. I flipped the CF card slot open and:

The card slot was mashed. It’s not at all unusual to see the odd bent pin and normally a quick poke with something thin and pointy normally sorts it out. This was not going to happen with this camera, the previous owner hadn’t just badly inserted the card, but when they felt resistance, they’d just carried on smashing the card in regardless and then scratched their head in a state of confusion when the camera refused to record images any more.

Whether this could be saved or not was 50/50 at best, but either way it was going to have to come apart to be investigated further and out came the blue mat. This normally means a project begins with great organisation and confidence and ends with a complete mess and an even more broken device.

Disassembly was surprisingly easy. There are some tiny plugs which need tweezing out and some tightly fitted ribbon cables, but other than the odd bit of solder which holds metal shields in place it came apart without too many problems. The same cannot be said for the CF card slot itself.

The pins were really feeling sorry for themselves and the damage was way worse than I’d first seen. One pin had been smashed in so hard that it had travelled right through the back of the connector and popped out of the back. Gently, I tried to tease one of the bent pins back up. It instantly snapped off.

Game over. I don’t have a hot air gun and that makes removal of larger components like this practically impossible without damage. I did try for about 20 minutes to very gently coax it off the board in the hope I could replace it with another connector I happened to have in a spares pile. No such luck, as it finally started to come off, 3 pads came with it and that really was it for me, I don’t have micro soldering skills.

The only thing left to do was to get another 300D advertised as spares and try to make a franken-camera out of the two. I bought one where the stated fault was a filthy sensor, so hopefully the card slot was still in one piece. It turned up quickly and as described – the sensor visibly covered with fungal growth which looked like a lightening strike.

So, with one good board and CF card slot, all I had to do was disassemble the new “for parts” camera and transfer the board across. Having taken the last one apart, it didn’t take long at all to strip another down to the point where I could do the swap.

Putting it all back together is really simple, you just have to make sure all the ribbon cables are nicely seated. The only nasty bit is the lower sensor cable which is so fiddly to get back in it makes me want to cry. Within half an hour the now hybrid camera was back together and to my pleasant surprise, it even turned on.

To celebrate this minor success I gave it an alcohol bath and scrubbed the sticky black goo off the various surfaces where the rubber has just melted into a nasty mess. When it came to testing it out, though, there was an issue. Actually, there were two issues. Initially, it completely refused to focus on anything at all. Changing the lens made the AF think that it was working, but it was massively out of focus, not just a little bit but completely off. Looking at the RAW files, you could also see that this camera too was full of fungus on the sensor.

The only solution was to have a go at cleaning one of the sensors. Being as the “spares” camera was already apart to the sensor, it seemed sensible to have a go with that one – especially as the focussing is likely to be working on that body. I unscrewed it and attacked it with alcohol and cotton buds. Fortunately, the fungus had grown between the sensor and low pass filter, meaning it was possible to wipe it all away.

Fast forward through another board swap back to its original home, cleaning off yet more black goo from the grip and another test and I now, thankfully, have a working 300D body.

The previous owner had last used this camera in 2019, we know this because they left a memory card in it with over a thousand images of various birds and their dog. Luckily there was nothing disturbing left on there, I’m dreading the day I turn a camera on to be confronted by a picture of someone in their pants.