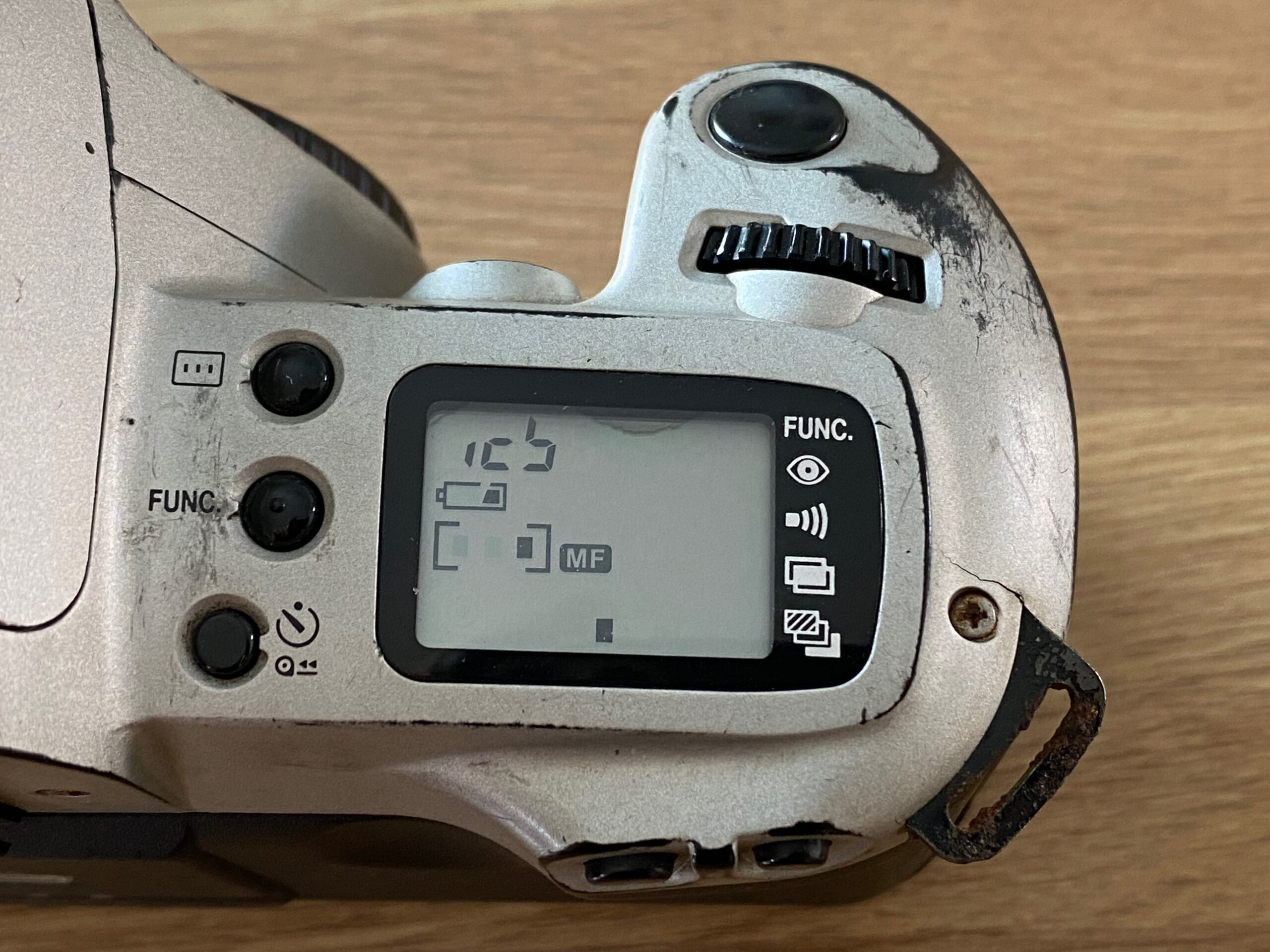 During a recent evening searching Ebay for very cheap Canon film bodies, I came across an auction for an absolutely battered Canon Rebel G. It was looking extremely sorry for itself in the pictures, some parts held together with tape and advertised as “functioning” but for parts or not working.

I won the camera for a single bid of £5 and thought it would make for an interesting experience to firstly see just how broken it was and whether I could repair it, but second to see how well a camera in this condition would hold up to being used again. What kind of performance do you get out of a £5 duct tape special?

I’m not really sure why I decided buying a potentially broken camera was a good idea, I’d seen it whilst looking for the cheapest 300V I could possibly find for a future project. I realised that something this knackered had a story to tell, so I bought it and waited to see what turned up.

Whilst waiting, I emailed the seller to find out a little bit more about the history behind it. The seller was kind enough to reply and sent me the following:

I bought this camera used on Ebay about a year ago in a similar condition to the one it is in today, though much dirtier. Fortunately the film compartment was clean and in good shape. I cleared up most of the dirt and the exterior and taped over a crack along the bottom casing . Obviously at some point in the past it must’ve been treated quite roughly. For the past year or so I’ve just been using it to capture some memories at university as it was a very cost effective way to use some of my Canon lenses which I no longer had a camera for.

I’d love to have seen what it looked like when he bought it originally, because the state of what I received was dirty enough for something that had already been cleaned. It also had the classic sticky grip that all old Canons seem to suffer from as the rubber coating degrades over time. If you’ve ever tried to repair an old cassette player, or anything belt driven from about 20-30 years ago you’ll understand exactly what this is like – black, sticky goo everywhere.

A closer look at condition

I’ve got to be honest, I expected worse when I opened the package. At first glance it seemed a lot more intact than I was anticipating, however on closer inspection, some baffling damage comes to light.

I can’t make sense of the damage on this Rebel G – see if you can work it out from the evidence.

The mode dial looks like it has either been on fire or sat near a fire at some point and occasionally refuses to turn when you need it the most. The LCD only partially works, the lens mount is cracked at the bottom and the flash no longer pops up (and charges itself when it feels like it.)

If you put it in certain shooting modes you will hear the tell tale sound of the flash capacitor charging up before the camera then thinks the battery is dead and turns off.

Most intriguing, to me at least, is that both strap mounts are completely bent. These are incredibly sturdy and took some forceful work with a pair of pliers to bend back.

If this camera were simply dropped once, maybe twice it would not explain the damage and overall condition. You cannot simultaneously bend both strap mounts. What on earth has this poor camera been through? It’s either had a seriously impressive accident like being dropped down many sets of concrete steps, or it has been deliberately abused. Either way, I can’t tell.

It is testament to the sheer robustness of film cameras in general that this body still powers on and functions to some extent.

Where does the Rebel G fit in?

The Rebel G is a “not quite bottom of the range but almost” model in the EOS film lineup. Pitched at the same level as the infamous 1000F/FN series, it caters for entry level photographers that want control over their images, compatibility with EF lenses and good pictures for a decent price. In that respect, it absolutely delivers.

The EOS 1000, 500, 300 series of SLR’s were groundbreaking in that they consistently delivered new features, lighter bodies, better auto focus and more at a really low price point that meant SLR photography really was accessible to most. For many users, once they had one of these cameras, there was little need to spend more on a better model, their money was absolutely better spent on lenses.

The 500n is surprisingly light in the hand and feels physically smaller than its predecessors. A lot of work must have gone into engineering a lighter body and this is visible in places like the lens mount which is made of plastic rather than metal. Changes such as this not only saved weight, but money too, meaning Canon could afford to put better auto focus systems into cheaper bodies in exchange for a slightly less robust build quality.

Having said that, you’ve seen the state of my 500n, I don’t think that anyone could argue the build quality is decent even for an entry level camera.

I initially went out with the 500n equipped with a 24-105 F4L lens. If you’ve used one you’ll know that this lens, apart from being the only lens you’ll ever need, is really quite big and heavy. I was extremely nervous about using such a heavy and expensive lens on such a battered body, especially as the lens mount itself has a crack in the plastic. I managed about 30 minutes before deciding it probably wasn’t worth the risk for a £5 body test and went home.

The damage to my 500n is not insignificant. As mentioned, there’s a crack at the bottom of the body and there are also cracks on either side where the strap should be mounted. These don’t seem to be too bad in terms of structural integrity and they have little effect on the functionality either.

The mode dial has taken a beating and often refuses to turn when you try to switch modes. Sometimes it’s fine, others it’ll steadfastly refuse to budge. The flash no longer pops up either and there is something very wrong internally with the flash because as I previously mentioned, if you accidentally trigger it, the body switches off entirely complaining that the battery is empty.

A lot of this is cosmetic or I was able to work around easily. It is the damage to the liquid crystal display on top of the body which you notice the most. This is so damaged that some parts simply no longer display anything, some display a feint line and the rest is ok if you don’t knock the camera. You have no idea how much you rely on a little display like this until it doesn’t work, the good news though is that most of the information you really need can be seen by looking through the viewfinder and fortunately that little green display still works perfectly.

Given all the damage, I had fully expected one of the mirror, shutter or auto focus to be damaged. The developed results of the first roll I put through it genuinely shocked me. As far as my eyes can tell, the auto focus is spot on and the camera has grabbed focus exactly where I asked it to. Not only that, the shutter has fired at the right speed and there are no apparent light leaks, no odd marks on the negatives – absolutely nothing that would give away the tough life this poor thing has had.

Moving away from condition for a moment, the 500n handles really nicely. Its light weight means you don’t get hand cramp from holding it for a long time, the grip is just big enough to be classed as ergonomic and comfortable (it’s better than a 350d grip, but then so would a sausage) and the auto focus performance is miles ahead of the 1000fn. In day to day use I very rarely had an occasion where it hunted for focus and this is probably down to the inclusion of a cross type sensor for the centre point on this model. It clearly works and would’ve definitely been worth an upgrade for users of earlier Canon models in the entry level line.

As a first film SLR, I have always recommended the 1000fn because it offers the right mix of features, control and ergonomics at a stupidly affordable price. This is still the case today, but the 500n is a definite contender if you can get it for the same £5-15 that you can the 1000fn. Given a choice between the two, you’d be fairly mad not to go for the 500n due to the much, much improved auto focus. In nearly every other respect, you wouldn’t really notice the difference between them in terms of features and usability. If you prefer a bigger body, then the 1000fn may still win out.

This camera is so bruised and abused yet still works. I cannot help but wonder how anything ends up broken to the point of being completely non functional when this 500n still works. How is it possible that I can own this camera which looks like it has been run over, yet it still fires and takes lovely pictures, and yet I have other cameras that look pristine and are totally dead? It baffles me.

Canon may have built and sold many cheap, mainly plastic film SLR’s in the 1990’s to early 2000’s but if this camera proves anything, it proves that plastic does not mean poor quality and a lack of robustness. Indeed, the more of these cheap, entry level SLR’s I use, the more I question why it was ever necessary for most photographers to upgrade at all. The lens on these bodies makes 99.9% of the difference to how good the final images are.

Of course, those who relied on their cameras from day to day and for an income will absolutely have needed faultless, quick AF performance. They justified the need for more control over metering and much faster continuous shooting capability. Dare I say it, they needed the better build quality and robustness of a body which truly could take a battering and keep firing after 100,000 shutter activations. But for everyone else, did they really need more than these extremely capable entry level bodies? I’m certainly not sure I will ever possess the skill to truly outgrow or outclass them.

I’ve developed a real fondness and something of a soft spot for this particular 500n. I will definitely keep it and use it again in the future. Having said that, I will also look at repairing and restoring it if I can – after all, I think if ever there were a camera that deserved it, this is the one.