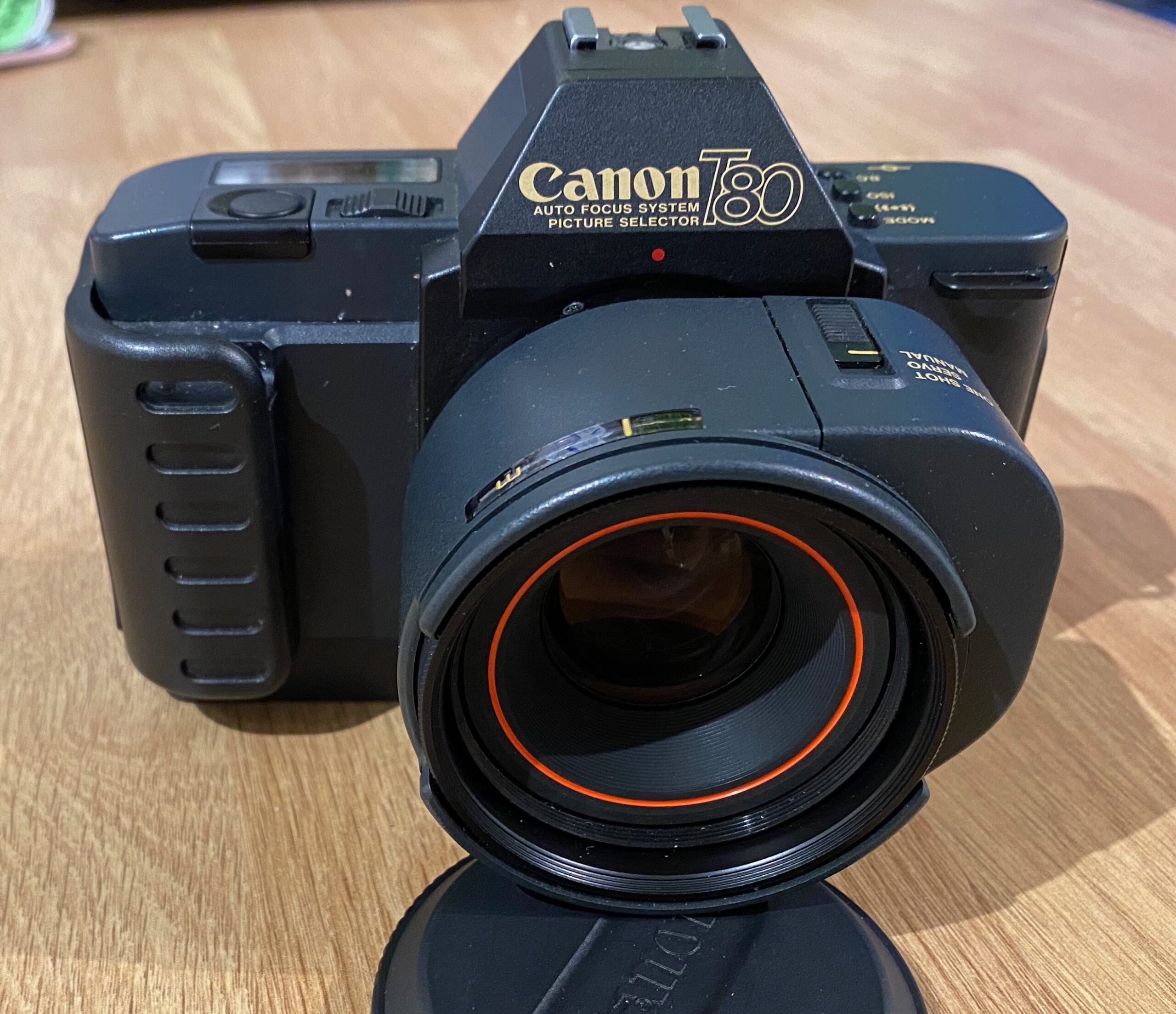 The Canon T series of cameras are something of a no mans land in the history of SLR cameras. They came at a time when all of the major manufacturers were transitioning away from manual focus to auto focus whilst simultaneously trying to stuff as many electronics as possible inside.

The late 1970’s to early 80’s had seen a huge change in electronics, for the first time micro chips and other integrated circuits were not only becoming more widely available but they were only getting cheaper, smaller and more powerful.

This Goldilocks condition meant the advent of cheap, feature filled electronic devices that drove huge changes in nearly all consumer facing markets. The sudden nature of this change saw manufacturers struggling to keep up both with the pace of change but also the actions of their competitors. If one company made an advancement it was much harder to keep up, simply because the electronics involved would either need to be reverse engineered or designed from scratch. This was not something you could just knock up in a few weeks.

Pentax were first to market with an auto focus SLR camera in 1981, closely followed by Nikon in 1983. It wasn’t until 1987 when Canon finally retired the FD lens mount and launched their true AF competitor in the form of the EF mount and EOS cameras. However, the EOS/EF series was not their first attempt at crossing from manual to auto focus.

In 1983, two years after the launch of the absurdly successful and brilliant AE-1 Program, Canon found themselves in something of a quandary. The market was rapidly being flooded by capable, convenient compact cameras that offered most of the features that the casual photographer demanded. There were fewer and fewer reasons why an amateur or casual photographer would need to invest in an SLR system to get satisfactory results, as had been the case previously.

Canon and others needed to react to changing market demands by offering a new reason to buy and use an SLR. That reaction came in the form of swing towards all out automation to remove the apparent burden of using a more complex system.

In the early 1980s, the SLR still dominated. Metering systems diversified as camera makers competed fiercely to offer the better camera. The confusion may have turned off users as more people began to avoid SLRs. In 1981, 35mm SLR production peaked at 7.67 million units. Two years later, this amount shrank by more than 30 percent to 5.37 million units.

Canon promptly rolled out the T50. The styling was very similar to the previous A series, but with an all plastic body, gold lettering and some other small refinements. The most notable difference compared to its predecessor was the complete lack of controls. This was a camera that offered you a shutter button and not much else. It also featured some bizarre quirks such as fully automatic film loading and winding, yet you had to manually rewind the film yourself, suggesting either a rushed or cost conscious launch.

With the T series, Canon really pushed the “image processor” and “full of electronics” angle. No amount of advertising, however, could cover up the fact that essentially these were barely any better than their predecessors. Lenses were still manual focus and merely introducing metering upgrades and a new styling wasn’t massively enhancing the experience for enthusiasts.

Indeed, for the more demanding photographer, nothing appeared until approximately 1984 and the T70 to tempt those existing Canon owners to upgrade. Finally, in 1986 Canon employed a serious industrial designer and consequently a truly superb piece of design in the form of the very futuristic T90 (still manual focus!) came along.

The launch of the T80 and AF

Arguably, the T80 was an experiment. It launched in 1985 and was quickly discontinued by 1986, making it one of the most short lived models in the entire T series. It is easy to see why – other than the novel and unique AF feature of the three compatible AC lenses, there was absolutely nothing here for a reasonably proficient photographer to encourage a leap into a new system. God help them if they did, it was an expensive mistake to make.

I can only describe the T80 as a mash up of the T50 and the bodging of a new lens on top of an old mounting system. I cannot understand why they went to the trouble of developing the sensor and other technology required for auto focus and then completely crippled the only compatible body.

The lack of traditional aperture priority, shutter priority and manual modes is inexplicable, especially in an SLR that cost as much as the T80 did. I understand that Canon were all out for regaining the market from automatic compacts, but they immediately alienated the one segment of the market that may have been interested in this AF venture – enthusiast amateurs.

Talking of auto focus, the AC (no one knows what AC stands for) lenses were big old beasts.

Anyone used to a standard, manual 50mm would’ve been quite taken aback by the bulk of the AC 50mm. The large growth on the side really did ruin the handling of the SLR as a whole, but was necessary to house the motor that controlled the focus mechanism.

Most manufacturers at the time were mounting all of the motor hardware inside their camera bodies, Canon were convinced that it should go on the lens itself. Whilst they didn’t get it right with the AC lenses, they absolutely did later when they carried this idea through to EOS/EF lenses that still contain the motors inside them to this day.

Due to the design choices made for the AC lenses the focus scales had disappeared, as had the usual large focus ring. In another strange decision, the manual focus ring on the 50mm lens was accessible only through two gaps on the side of the lens housing at the front, making it practically useless.

The shame of this whole design is that in use, AC lenses actually work very well and look half decent too – I do love the red ring. They’re not fast and although they are noisy in use, they generally grab focus reliably.

Around 2008 I had a T80 with a the AC 50 and AC 35-70mm lenses. I shot a roll of film on it and then sold it on again to someone else. I recently thought it’d be good fun to have another go with the AC system and looked out for the cheapest way back in to the system that I could find.

As with most things today, the T80 and AC lenses have got more expensive – not too much, but enough to make you think twice when it’s almost certainly only ever going to see one roll of film through it. I took a calculated gamble and put an offer of £15 in for this:

I knew that for this money, even if the camera didn’t work the lens probably still would and £15 for the 50mm isn’t too bad. Anything else was a bonus.

The description was the usual vague nonsense:

Allow me to translate

Untested – I have absolutely tested it, it’s dead, but I want to get rid of it so I shall protest innocence and ignorance.

No returns – I know full well it’s shagged, this is now your problem.

No one is so stupid as to ever believe the “untested” nonsense on ebay. Ever.

Ebay listings have developed their very own language over the years which, to the uninitiated, requires a dictionary to translate all the utter drivel that sellers pump their listings full of in the hope of boosting sales. The worst offender is “rare” in the title. I’ve seen sellers put the word rare for listings where a search for the same product reveals a thousand results.

Now, I fully expected it to be broken on arrival. What I didn’t expect was to discover the single worst battery explosion I’ve ever seen in my life.

I set about taking it apart because if it really were just a battery leak causing issues, once cleaned there was a high likelihood of resurrection.

It took some time to whittle my way down to underneath the battery holders as I couldn’t find a teardown or service manual for the T80 with a quick search. After peeling back various bits and pieces, extracting lots of green metal and removing countless screws I eventually got to the crux of the problem.

The leakage had corroded the main power wires clean off the battery connectors, so no bananas for guessing what was causing the lack of action when you flicked the power switch. Upon finding this I was quite excited, it seemed a straight forward repair and we may be in luck. It had eaten three other wires, but they all seemed to have been connected to the external connector, so I didn’t think they were essential.

What should have taken 10 minutes then, as usual, took about an hour. I managed to solder some new wires to the battery terminals, successfully stripped back the old battery wires (not copper, cheapskates) but do you think I could get the solder to stick to the old wires? Nope. Not happening.

No amount of flux, cleaning, nor attempts at tinning the wire would work. I’ve never experienced a wire that so steadfastly refused to take solder or to be soldered. I resorted to performing one of the worst electronic repairs of my life where I wrapped the old wire round the new as best I could, before flooding the end of the new wire with so much solder the old one couldn’t slip off. It was good enough for a test and…

I carefully reversed my steps and put the whole camera back together before turning it on and checking it still powered up. It did and a cursory prod of a button was met with what seemed an appropriate response. I put the lens on, half pressed the shutter and… *click*

Sadly, not the click of the shutter firing. The T80 was making some odd clicking noises, the occasional pretend film wind and not a lot else. Only one button worked and I’m not convinced that actually did what it was supposed to do. This camera has issues, many issues.

So my flirtation with another T80 comes to an end. I would be tempted to strip it down further to investigate but the probability is that there will be further corrosion damage and if more wires have become detached I’ll be damned if I’m spending another hour wrestling with alcohol and flux to try and get a minute strand of metal to stick to something. Sometimes, it just isn’t worth it.

I shall keep the AC 50mm in case I land on another T80 for next to nothing, I’ll also keep this T80 for spares – you never know. For now, however, this is a film photography project that is well and truly on the back burner.

Sometimes, your best laid plans just don’t work out. It’s good to share the failures as well as successes!