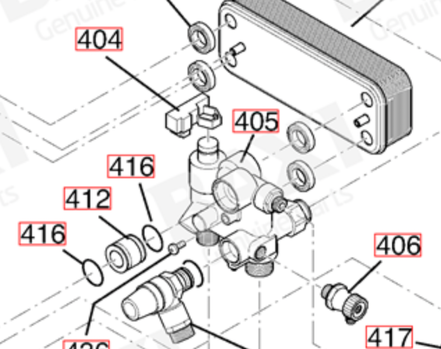 By now I have learned that all the appliances I own seem to find some way of destroying themselves at some point, and when they do, it’s never just as simple as a straight in and out swap. Todays tale, you’ll be glad to know, does not include washing machines.

A while back, I noticed the boiler in my house was quite literally redlining itself. This is not a good thing. When your boiler heats up, the pressure increases. If it increases too much then, quite obviously, there’s a risk of things blowing up.

Boiler manufacturers are not stupid, they know that exploding boilers are really, really bad press. For this reason they’re stuffed with all kinds of safety devices including one which blows water out of a pipe outside your house if the pressure gets too high. Sure enough, outside a steady trickle of warm water was running down the wall.

The good thing about Google is you can normally diagnose a problem like this relatively quickly – you can guarantee you’re not the only one with the same issue. The problem with this should be fairly obvious too, you literally have no idea who has posted the information and what their qualifications are. That’s quite important when you’re considering whipping your boiler apart to fix it. To be clear, if this was a gas related issue, I’d have left it alone, but considering it was a air/water job, that’s an acceptable level of risk.

In the picture above you can see a big red thing to the top left which looks like a hot water bottle. In reality, it’s a metal hot water bottle with a rubber bladder inside. You pump it up to around 20psi and as the pressure rises, water goes in here and balances out the pressure in the system as a whole. Inevitably, the rubber inside dies after many heat/cool cycles and needs to be replaced.

Cue a trip to the plumbers merchant, a place where mere mortals like myself find myself in the most uncomfortable place in the world. If you’re not “in the trade, mate” then you don’t belong in there – and they know this. They can tell as soon as you walk through the door that you haven’t a clue what you’re doing and they are certainly not about to make life easy for you.

Armed with a shiny new hot water bottle and a £3 washer, I was ready to engage with something I truly dislike – plumbing. I don’t mind electrics, things either explode or don’t work. I can cope with that. What I can’t cope with is water gushing everywhere. Things getting damp is very depressing, but needs must.

The first thing I discovered is that my boiler is full of spiders. Lots and lots of very gangly, very dead spiders. Once they were cleared out of the way things went quite well. So well, in fact, that I’d go so far as to say it was a fairly easy job. That was until I went to swivel a drip tray back in place and something made that dreadful rattling noise – the rattling noise of something falling off and dropping down the back of the boiler.

A few seconds later, I fished this out:

What on earth was it?

Looking at it, nothing appeared broken. I’d not snapped anything, no marks on it, nothing. I looked at the top of the boiler where it came from and there didn’t appear to be anywhere for it to go. Even more strange was that it had a connector for some wires, but it didn’t appear to have ever been plugged in, nor was there an obvious connector on the top of the boiler, nor any wires hanging about. This was more and more confusing by the second. I had the nagging worry that this was something that connected in a place I couldn’t get to, and that’d be bad news.

For the whole of this story, you should be asking “Why are you telling us this? What’s the technology angle?”

I shall tell you.

I did what anyone with a computer would do – I Googled the part number.

I Googled all the markings on it I could find.

I whipped it out of its little plastic case and looked closer for more information and luckily found a manufacturer and part number. I Googled that.

What did I get? A very, very obscure Italian Ebay listing. It was the same part – but I can’t read Italian. Not to be outdone, I translated the page to find that technical words don’t translate well. It came out as “turbine” something or other.

This is the problem with Google. It is very, very good at pointing us to things that are every day searches. Things that lots of people speak about online or have written content for. However, as soon as you go off the well beaten track and search for something very specific then things really do fall apart. Google, it turns out, does not know everything and usually when you need it the most, it lets you down because you’re the only person in a very unique situation – it has nothing to go on!

Why was I unique, then? Well, I couldn’t put the boiler back together without finding out what was going on, so I took another angle. I found the parts manual for my boiler and after digging through every sensor in the boiler, I discovered this:

Can you see the part labelled 404 above? That’s a “hall effect sensor” which is something that you use to monitor what a motor is doing, it picks up the movement of magnets (which is what powers an electric motor).

This was an exact match for the part I had in my hand, we were getting somewhere.

What I also learned from this diagram is that the sensor belonged next to the pump. A quick gaze into the boiler and… there was already one there? Very happy it was too, all plugged in and sat in the correct place.

The only conclusion I could come to was that ever since I’ve had the boiler there has been, for no reason at all, a spare sensor sat on top of the combustion chamber. Nice.

Armed with this information and some certainty that I’d not actually destroyed the boiler, I put everything back together and I am happy to report a minor miracle – my house is not on fire, the boiler has not exploded, it’s not leaking and it appears to work.

What is the learning from this experience? Well, other than nothing is ever as simple and straightforward as it first seems, we learn that you cannot simply rely on google for everything, and you certainly cannot rely on it to get you out of trouble. We also learn that, as we try to encourage students to do at school, you cannot simply give up because your first try doesn’t turn up the result you expected.

Too often we find ourselves in situations in lessons where students will Google something, not get the answer they were expecting or find something completely irrelevant and either stop dead or blindly trust it. This is a real life example which goes to show you just can’t do these things. Faced with this situation, I had two choices – stop and pay someone to look at it, or solve the problem myself. I went for the latter, but it takes some persistence or tenacity, you need to be prepared to find a different angle sometimes, another way of solving the problem which you may not have thought about at first.

And that, my friends, is the take away from this story. Don’t give up at the first sign of a problem and you may well be rewarded with not only a successful outcome, but you’ll learn something along the way. Something like “occasionally, people who work in the Baxi factory chuck spares into boilers for no reason…”